How to Plant, Grow and Care for Honeysuckle Plants 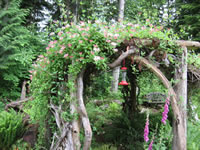 The flashy and fragrant flowers will attract hummingbirds and butterflies all summer long.

The resulting fruit of the flowers will provide a fall treat for your local songbirds as well.

The most common use is to allow Honeysuckle vines grow along a trellis, fence, arbor, or other framework, but Honeysuckle can also be grown without support as a ground cover or used for erosion control. The vines will bloom heavily in spring and to some extent throughout the summer. Many varieties of Honeysuckle will thrive in containers as well.

How to Plant and Care for Honeysuckles

Honeysuckle plants prefer full sun, but will tolerate partial sun, and even some light, afternoon shade. Once established, the plants need only moderate watering, unless the summer is very dry.

If the planting area is properly prepared and mulched, your Honeysuckle plants will be satisfied with a light annual applicaton of a balanced fertilizer (10-10-10) at the beginning of the growing season, and then once again in the middle of the blooming season.

Honeysuckle can be planted in early spring, as soon as frost danger has passed. Prepare the planting area as you would for any other perennial and set the plants a minimum of two to three apart and 6"-12" away from any support structure. Plant them 2 feet apart if you are using them as a ground cover plant. Water the plants thoroughly, and follow up with repeated soakings until the plant shows signs of new growth. Mulch the plant with heavy cover of leaves, to protect the roots from freezing as well as to conserve moisture in the summer.

If your Honeysuckle is to be grown on a trellis or an arbor, put this support structure in place before planting, to avoid damaging your vine. Then plant your Honeysuckle 6-12 in. away from the support to allow enough growing room for developing stems. The vines should be tied to their support using strong, stretchy materials that won't cut into growing branches. Strips of old nylon hosiery work very well for this. Loop each tie into a figure 8, with the crossed portion between the stem and the support to keep stems from rubbing or being choked.

When your plant has finished blooming, you can cut and prune for shape. Prune Honeysuckle vines back in the winter to increase flowering. Only lightly prune plants until they are well established. Do not over-fertilize Honeysuckle plants! Beware of aphids...

Propagating Honeysuckle Plants and Growing them from Seed

Rooting honeysuckle cuttings is easy! The best time to take cuttings is when new growth starts to appear in the spring, although if there is green growth, you can do it indoors most anytime of the year. Cut a length of green, softwood growth from the end of one (or several) of the vines, making sure to get several sets of leaves. Strip the leaves from the end of the cutting nearest the cut end. You should have one or two leaf nodes bare and one or two sets of leaves left on the vine. At this point you have a couple of options...

One method is to dip the cutting in rooting hormone and place it in damp potting soil or other rooting medium. The other method is to place the cutting in a vase of water and allow the roots to develope that way. If you go with the water method, be sure to change the water regularly to prevent rot. In about 1-2 weeks you'll see the new roots beginning to grow. When you have several good roots an inch or so long you are ready to plant your new Honeysuckle vine in a pot or in the garden if there is no danger from frost.

Honeysuckle seeds can be sown directly in the garden in early spring or in the fall.

There are about 180 species species of Lonicera. Some are evergreen, while others are deciduous. Some are vining plants while others grow as shrubs. The hardiness zones of different Loniceras can vary considerably with different hybrid varieties as well. The general requirements and care for Honeysuckles are about the same, whether your plant is a vining type or a shrub variety.

Consult your local garden center to find the right plant to suit your needs and for your location.

Goldflame Honeysuckle, Lonicera heckrottii, is a deciduous vining plant that is hardy in zones 5-9. Grows 15-20 ft. Produces fragrant flowers that are hot pink with yellow throats, from late spring through mid summer.

Trumpet Honeysuckle, Lonicera sempervirens is a semi-evergreen vine that is hardy in zones 4-10. Grows to 12ft. Produces bright orange, red or yellow, tubular flowers from late spring to mid-summer.

Henry's Honeysuckle, Lonicera henryi, is an evergreen vining plant that is hardy in zones 4-10. Can grow to 30ft. Produces red or yellow, tubular flowers all spring and summer.

American Honeysuckle, Lonicera americana, is a deciduous vining plant that is hardy in zones 6-10. Grows to 25ft. Produces strongly scented yellow flowers that are tinged with red, pink or purple from late spring through early fall.

Hall's or Japanese Honeysuckle, Lonicera japonica, is a deciduous vining plant that is hardy in zones 4-10. Excellent ground cover for erosion control, but can quickly become invasive if it is not kept in check by pruning it back hard in winter to prevent the build-up of woody growth. This variety should not be planted near shrubs or small trees, which it may climb and strangle. White flowers that fade to yellow in late summer into fall.